Three guys from Norfolk, UK with a love of Rockabilly and Rock ‘n’ Roll finally get it together and stick a ribbon on it! All three have been playing the local and national rock ‘n’ roll music scene constantly since childhood (and that’s a long time for some of us!). All three have been front men and vocalists of their own bands, rockabilly and otherwise, over the years and all three are multi-instrumentalists. All three have appeared on TV, Radio and CD and played in bands covering a variety of musical styles. 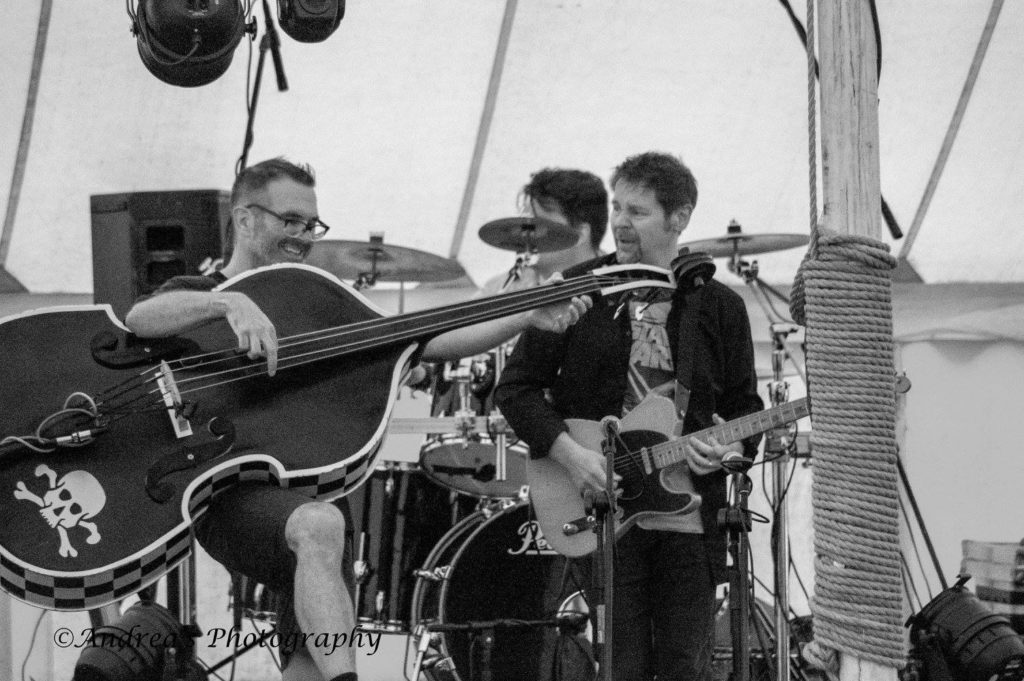 Ron Sayer and Wayne Beauchamp played together in the 1980s along with Dale Beauchamp in rock ‘n’ roll band “The Streamlines” and then again in the 1990s in rockabilly band “Dawg House” who had album releases in the UK and Germany on the Rockabilly & Psychobilly Bone Tone and Vampirette labels along with many rock ‘n’ roll compilation albums.

Darly Blyth and Wayne spent many years playing together in the skiffle and bluegrass band “The Ugly Dog Skiffle Combo” who had two commercial albums released on the Western Star & Vampirette labels along with many rockabilly compilation albums. They then played together in the raucous rockabilly/punkabilly band “V8 Rumble” in more recent times who also had a commercial album released on German rockabilly record label Vampirette.

Together Ron, Daryl & Wayne have played several gigs together under makeshift guises playing Rock ‘n’ Roll gigs in Norfolk and having loads of fun. You could say it was inevitable these three would give themselves a band name one day and take it a bit more seriously although “serious” has never really been a viable option for any of them!

Individually all three members have clocked up some interesting (sometimes impressive) musical achievements, more information can be found here…

We use cookies on our website to give you the most relevant experience by remembering your preferences and repeat visits. By clicking “Accept All”, you consent to the use of ALL the cookies. However, you may visit "Cookie Settings" to provide a controlled consent.
Cookie SettingsAccept All
Manage consent

This website uses cookies to improve your experience while you navigate through the website. Out of these, the cookies that are categorized as necessary are stored on your browser as they are essential for the working of basic functionalities of the website. We also use third-party cookies that help us analyze and understand how you use this website. These cookies will be stored in your browser only with your consent. You also have the option to opt-out of these cookies. But opting out of some of these cookies may affect your browsing experience.
Necessary Always Enabled
Necessary cookies are absolutely essential for the website to function properly. These cookies ensure basic functionalities and security features of the website, anonymously.
Functional
Functional cookies help to perform certain functionalities like sharing the content of the website on social media platforms, collect feedbacks, and other third-party features.
Performance
Performance cookies are used to understand and analyze the key performance indexes of the website which helps in delivering a better user experience for the visitors.
Analytics
Analytical cookies are used to understand how visitors interact with the website. These cookies help provide information on metrics the number of visitors, bounce rate, traffic source, etc.
Advertisement
Advertisement cookies are used to provide visitors with relevant ads and marketing campaigns. These cookies track visitors across websites and collect information to provide customized ads.
Others
Other uncategorized cookies are those that are being analyzed and have not been classified into a category as yet.
SAVE & ACCEPT
Powered by